I’m sure you’ve seen the stats:

It’s a brutal market out there. And as much as I like to boast about how my trading doesn’t correlate with the broader market—it doesn’t mean I’m not prone to drawdowns.

For some traders, a drawdown can put them in a wicked downward spiral.

That’s why it’s just important to know how to lose in the market as it is to win.

Today, I want to walk you through my process and show you what I do to snap out of a losing streak.

Don’t Call It A Comeback

As I mentioned, I hit a slump and my trading account felt the impact.

Still, a 640% return in just 2 months is nothing to be ashamed of… but my collapse is, and I hold myself accountable for that.

The first thing I did was recognize it.

That let me know something was off and it’s time to make some changes.

In that regard, last Thursday I sent a video out to my members to talk about my slump and how to learn from it and move forward.

Here’s what I talked about. I hope this helps in your trading… it happens to the best of us. But the difference is that a profitable trader knows how to get back on track.

Close Out and Take a Step Back

I started by closing out my positions so I can step back and clear my head.

This let me look at the trades that got me here and pinpoint the mistakes I made.

Without this knowledge I would most likely keep making the same mistakes… and losing money.

And let me tell you, once I looked at my trades objectively, the mistakes pretty much just jumped out at me.

I know what I am supposed to do with my trades. Sometimes I make mistakes and I just need to be honest with myself so I can fix them and move on.

It’s Not Okay to Catch Feelings

Once I took a second to sit back and reflect. I found a few glaring mistakes.

And this is where I made my mistake….

I caught feelings. I got caught up in the magical view of taking my $500 and growing it into  $10k in just 2 months.

I let my emotions lead to shortsighted trading and I started pushing it too hard.

When I should have been taking multiple trades to lessen risk, I was taking on more risk trying to jump the $10k… and I know if I just stick to my plans, I would be past it in time.

But I’m human and make mistakes.

So what went wrong?

My emotions led to me going all in on my most recent trades.

Instead of spreading it out, I was too focused on pushing it with one trade. And they all seemed to go against me.

So was it just a bad time to be all in?

Sure, but more importantly it was just a bad trading decision.

I know how the market is moving right now. I should have my capital spread out.

And regardless of that, I normally would take 2-3 trades a day anyway.

So why was I all in on just one each day? The big no no… emotional trading.

My last BIG mistake, I was able to easily identify was on RMSL.

I averaged down when I should have been stopping out.

Rookie mistake. I do sometimes add to a position.

But I have a good reason for it. Maybe it’s holding a key level or making a move off that level.

Most of the time averaging down is a rookie mistake.

You have a stop and you take it. Preserve your capital for your next trade.

So what happened with RMSL?

Entry was good. Exit was BAD!

As I mentioned, if I average down there has to be a good reason.

But with RMSL, I bought on a nice move… there was a recent history of a 2 day move.

But it opened up the next day and fell off… so what I was expecting didn’t happen… time to stop out.

Instead I averaged down. Again, letting my emotions get in the way.

And to be clear, there was no reason to average down…

I was looking for a 2 day pop, when it didn’t happen, the trade was over. 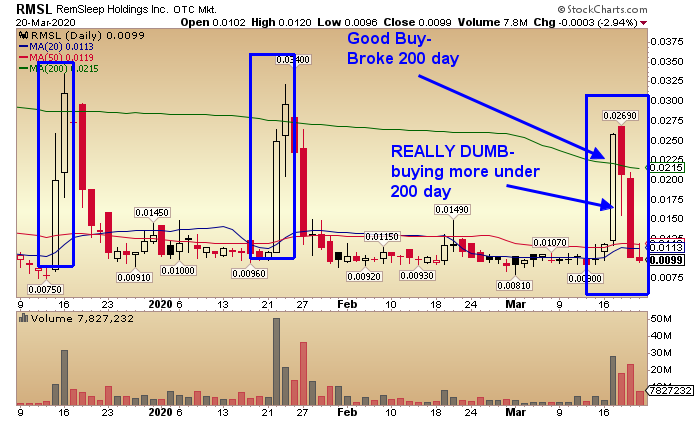 And to top it off, the stock fell through the 200 day moving average. Another sign the trade was over. But that’s where I averaged down. Very Big Mistake.

What could have been a loss of a couple hundred tops turned into a $1,500 loss.

But it’s not the end of the world because I know I can catch myself and make the changes to right the boat.

With my mistakes identified, now I can move on to fixing them.

I didn’t stack my account by trying to make money fast.

I didn’t push it… I searched for the best trades and entered them. Took my profits when I had them and stopped out when the trades didn’t work.

I took very small losses quickly. I was preserving my capital for the trades that worked.

In fact, my account grew very slowly at first. And by sticking to my trading principles, as the account built up more capital, it blasted off.

So moving forward, it simply comes down to a back to basics attitude.

My plan going forward is to focus on my strategy and my best setups.

Patterns I like, volume, strong close, catalyst, don’t fall in love with any one stock…. Pick my favorites and spread the love.

By following my steps for finding my trades and sticking to my trade plans, I can take the emotions out.

And I will not be focusing on any type of goal. There is no reason to push for some arbitrary number.

I know that if I just trade, the account will build. Just like it has been. And potentially blast off again when the timing is right.

The other thing I am planning to help jump out of my slump is to take 2 trades per day.

When I was pushing for 10k, I was going all in on single trades. By taking 2 trades, I can split out my capital and my risk.

And this will help me think more clearly because I won’t be so narrowly focused on one trade.

And lastly… look for gains, any gains.

Grabbing some small wins is a great way to build your confidence back up.

Don’t expect huge moves, gang. They will come on their own. But having realistic profit targets  will get you back in the game and out of a trading slump real quick.

Take the little wins… get some green on the screen, build confidence, and you’ll be back on track in no time.

Putting it in action

Here’s what I did when I got back to my desk after lunch on Thursday. 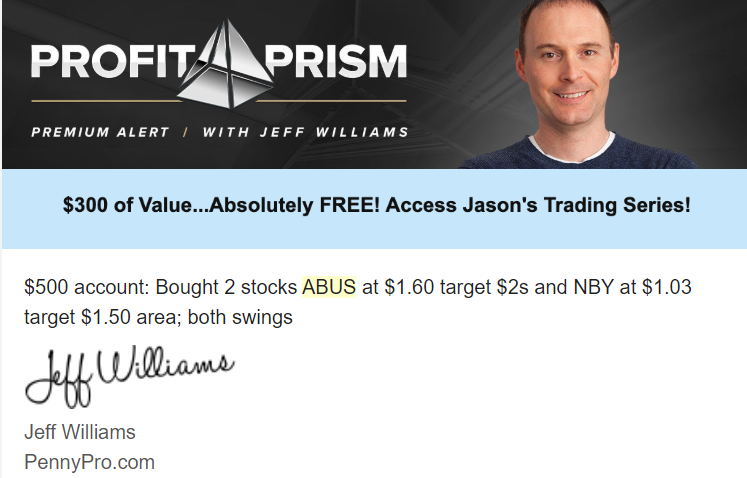 And my results are back on track.

And for my second trade, I bought NBY at 1.03 and in the premarket the next day I was able to eek out a 12% return as I didn’t get any follow through. 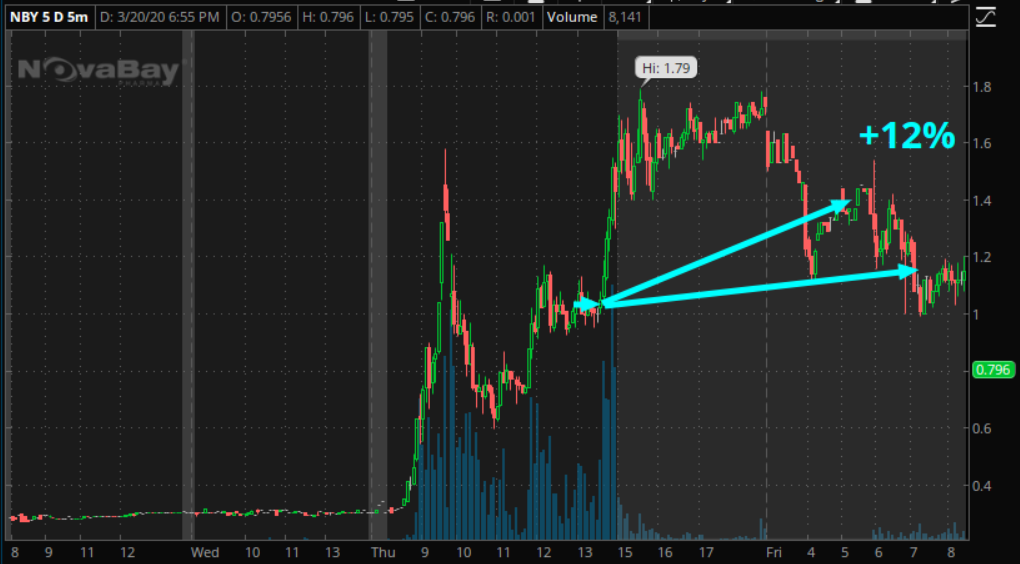 What I did to get on track?

I stuck to my best trade setups. I took two trades. And I took small wins to get my account going in the right direction and build my confidence back up.

And I didn’t average down on NBY… I gave some back, but instead of getting emotional and averaging down, I took the small win to put some green on the screen.

I recognized and admitted I had a problem and cleared my head.

I came up with a plan.

As you can see, I came right out of my pause and started trading my plan.

And because of that, I’m headed back up.

Learn more about how to trade stocks with my free offer…