The economy is completely dislocated from the stock market.

If you haven’t accepted that yet—you’ll probably struggle to make money.

Price action, momentum, and catalysts are what you should be lasered in on…

Believe it or not…

Logic and reasoning will fail you.

I would say most of the stocks I trade defy rationale.

But does it really matter?

After all, I’m just trading not investing…

The whole point is to be in and out with a profit…in a relatively short period of time.

Today, I’m going to show exactly what I’m talking about with a trade I took this week in Genius Brands (GNUS).

Genius Brands is another stay at home play that hit my radar recently.

The children’s television programmer provides “content with purpose” for toddlers to tweens.

Think cartoons that entertain as well as enrich and educate. That’s a dynamic duo for all the parents out there.

And with all the “Stay at Home” orders around the country, it’s a great play on current themes.

To add to the interest, just last week, they announced a licensing agreement with Mattel to sell toys based on their popular shows through retailers like Walmart and Amazon…

And even bigger, they announced a brand new on-demand children’s programming channel, the “Kartoon Channel.”

With the channel going live June 15, it is expected to reach over 100 million households and over 200 million mobile devices.

That’s a lot of households, but it makes sense since the service will be available through all the popular subscription-based services – Amazon Prime, Sling TV,  Apple TV, major cable companies, and the list goes on and on.

I first pointed this stock out on Wednesday’s Platinum midday watch list, when I noticed the stock making some big moves after the release of its shareholder letter detailing the launch of “Kartoon Channel.”

GNUS shares had already made a few runs higher on solid volume so far this month. And even though GNUS was looking strong on Wednesday morning, I wanted to make sure the increased demand would hold through the lunch hour.

And to my delight, the shares were making a beautiful pattern of higher highs and higher lows through lunch.

This is one of my favorite patterns, the infamous stairway to profits… 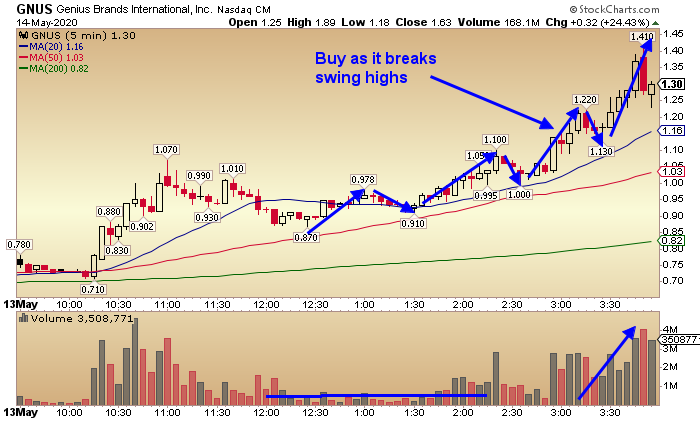 I didn’t actually make my move until later that afternoon though.

With a trade like this, I’m looking to catch an overnight swing from the increased demand and upward momentum. So waiting till the end of the day to verify continued momentum is key.

And that’s exactly what I saw when I decided it was time to pounce on this one and add to my $50K Challenge portfolio.

Continued strong momentum with volume and price ramping up at the end of the day, you can’t beat that combo. 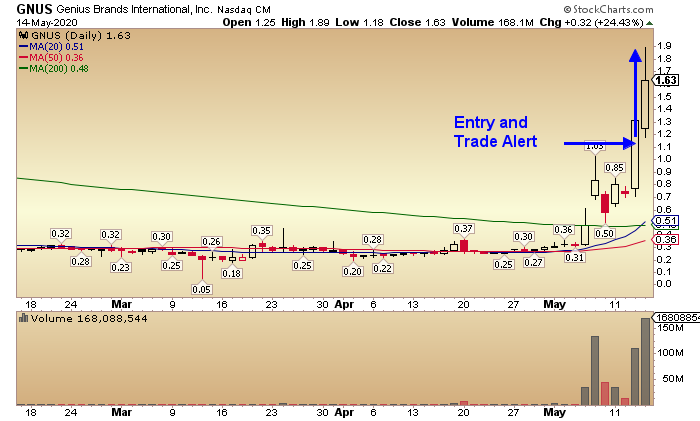 And I know some of my $50K Challenge members held on even longer and nabbed some pretty sweet rewards!

Just look at the gain Brandon pulled in playing my GNUS alert.*

With GNUS tapping as high as $1.89 yesterday, this is an example of how trading your own plan can really pay off.

I’m here to teach you and help you as much as possible, but always up to you to find what works best for your trading. That’s what will make you consistent for years to come.

*RagingBull.com, LLC utilizes select testimonials depicting profitability that are believed to be true based on the representations of the persons providing the testimonial. However, trading results have not been verified and will vary widely given a variety of factors such as experience, skill, risk mitigation practices, market dynamics and the amount of capital deployed. It is easy to lose money trading and we recommend educating yourself as much as possible before you even think about trying it. Past performance is not necessarily indicative of future results.

Jeff, I am up over $4k since last Monday! That’s enough to pay for a few years of this service, thank you. Yeah, baby!