Lessons From A Penny Pro
by Jeff WilliamsFriday, July 5, 2019

If you go to my twitter account, you’ll notice I put up today’s watchlist on there, instead of emailing it to members like I almost always do.

Because when you are running as hot as I am, sometimes you need some social proof.

(Nice start to the morning. I posted my video watchlist on Twitter yesterday, make sure to follow me and keep in touch)

If you haven’t heard, I’ve recently started up a 100K Small Account Challenge.The goal is to take a small, $3K trading account and built it up to $100K before the year is over. If you’ve considered joining my service, now is the time to do so.

Here’s how it’s been going over the first two weeks or so:

With $3K I am able to put on at least two positions at once. And since I’m a high probability trader, the more trades I have on, my chances to gain more are enhanced.

And that’s the thing…

You don’t need a lot of money to start with trading with me.

In fact, you’ll be surprised at how much “optionality” that penny stocks have…

…especially if you’re trading sub-penny stocks– stocks that are priced under a penny per share.

What are they about?

And most importantly, how can we use them to make more money in the market?

It seems like every time traders talk about penny stocks, they think all they’re shady stocks and you shouldn’t trade them… especially with penny stocks trading under 1 cent.

Now, if you don’t know, there are penny stocks out there that actually trade below 1 penny per share. However, these stocks aren’t listed on NYSE or NASDAQ, rather, they’re listed on the OTC Markets.

However, just because they’re not listed on NYSE or NASDAQ, that doesn’t mean you can’t make money trading them… you just have to know what to look for and avoid some of the common pitfalls.

The first thing you want to do if you’re looking for sub-penny stocks to trade is to see how liquid they are. In other words, you want to see how many shares on average the stock has traded per day historically.

Basically, if you’re trading sub-penny stocks… you’re going to want to be able to get in and out of them fast because they can move quickly… and the last thing you want to happen is holding on to a large chunk of shares and have trouble getting out of your position.

For example, if you go to the OTC Markets Screener, you can find some of the most actively traded sub-penny stocks.

Now, if your brokerage platform allows you to filter for sub-penny stocks… you can actually find some great
plays.

Don’t Size Your Positions too Large

When you’re trading sub-penny stocks, it’s actually really easy to pick up a large number of shares. For example, think about a stock trading at $0.009, you could buy 1M shares… and that would only cost you $900.

Sometimes, it’s pretty easy to get too excited, thinking a sub-penny stock could skyrocket and buy a lot of shares… expecting you’ll make a ton of money.

However, what happens if you buy too many shares and there’s no demand?

Well, you’re either going to flood the market with shares and cause the stock to fall… or you’ll just end up stuck.

So if you’re new to trading sub-penny stocks… don’t size your position size too large in relation to the average volume.

For example, let’s say a sub-penny stock has an average daily volume of around 200M shares… you’ll probably be safe with 1-2M shares… but if you buy say 20M+ shares, you could find some trouble getting out.

You see, when you buy so many shares…you’re actually a bulk of the volume. The one thing you need to pay attention to with these stocks is how you’re going to get out… if you try to hit the market with 20M shares and take profits… what do you think will happen?

The price will drop because you’re flooding the market with a lot of supply.

Once you understand volume and why it’s so important, you’re probably going to want to know some bullish chart patterns.

For the most part, I use charts to spot my trades… and if I’m trading sub-penny stocks I only look for those that are actively traded.

For example, the other day, I actually traded a sub-penny stock. Lans Holdings (LAHO) was a hot sub-penny stock… and there were actually some signs that it could run higher. 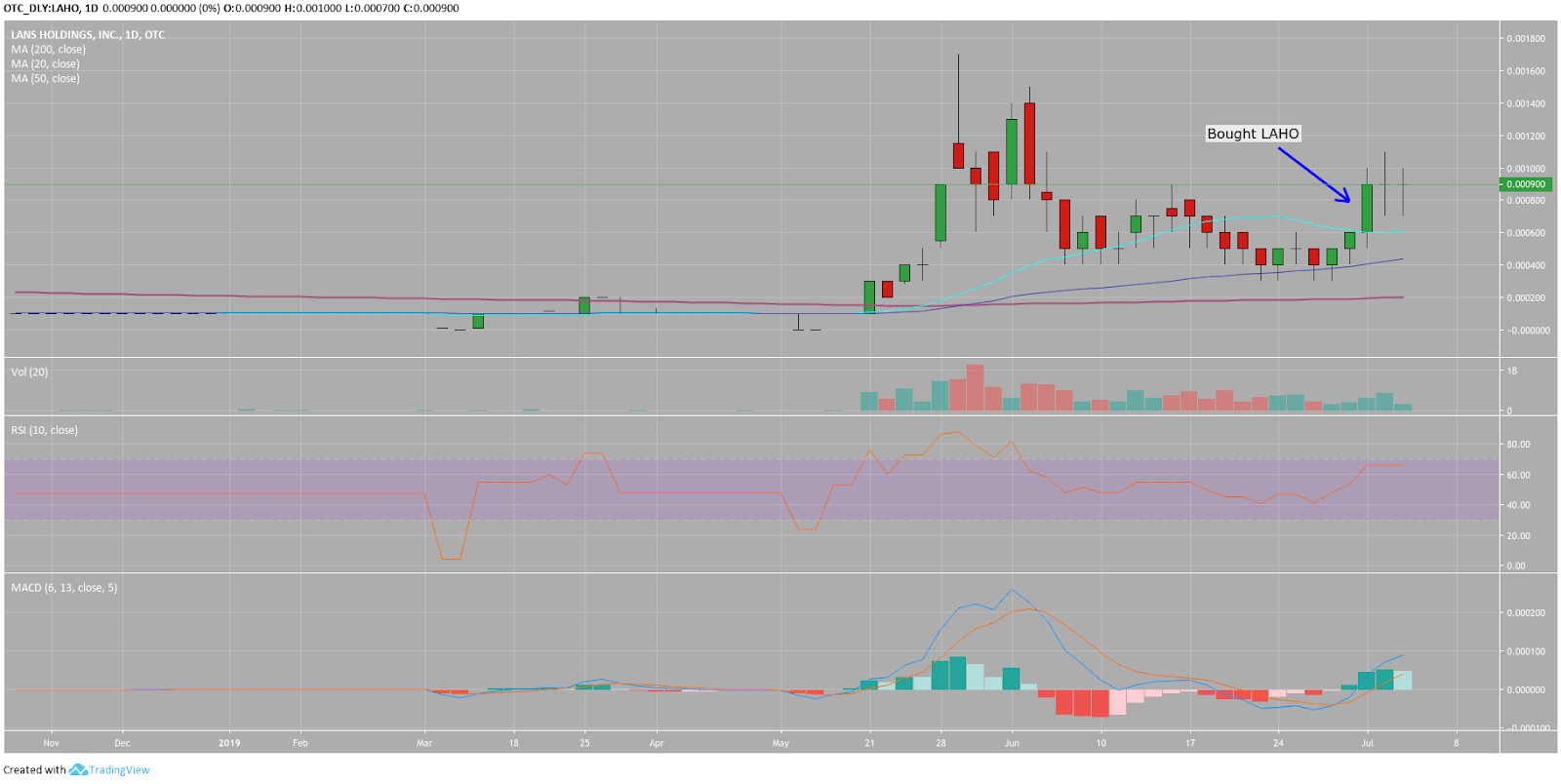 If you look at the daily chart in LAHO above, this stock already had a massive move higher before… and was actually looking to run up again, potentially re-testing its recent highs. 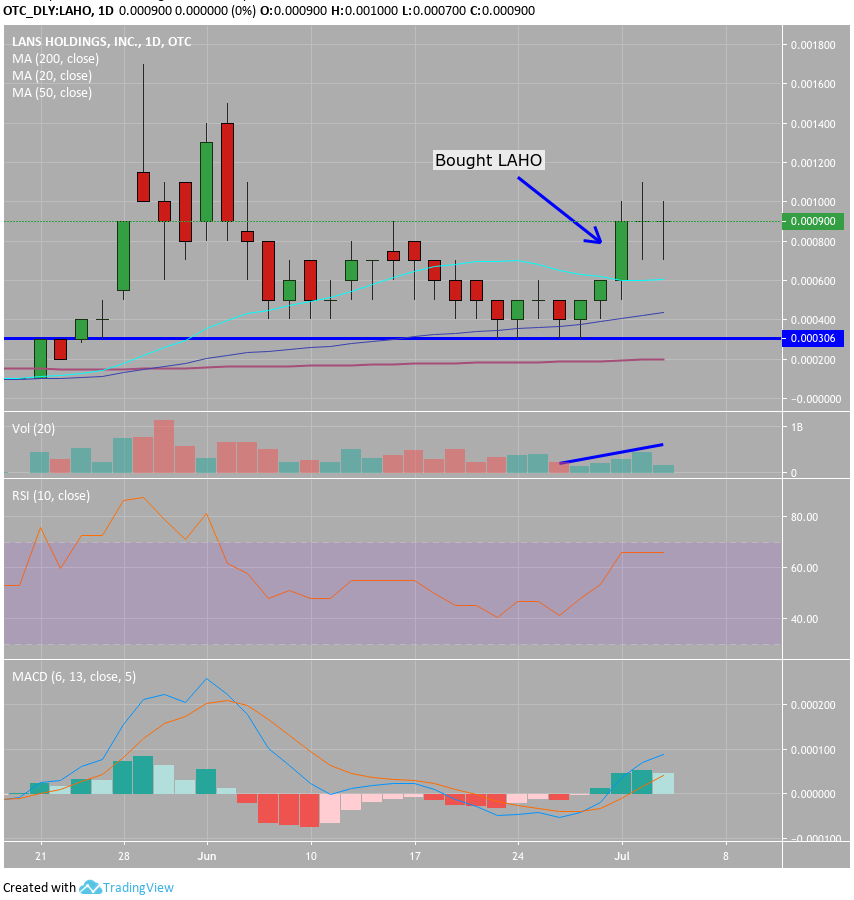 As you can see this stock had strong support (the blue horizontal line). In other words, the stock had a tough time breaking below this level.

Not only that, we saw the stock bouncing off the support level and starting to rise with volume picking up. Now, I actually picked up some shares after I saw LAHO break above a key moving average line… indicating it could run higher.

Of course, I alerted clients about my moves. 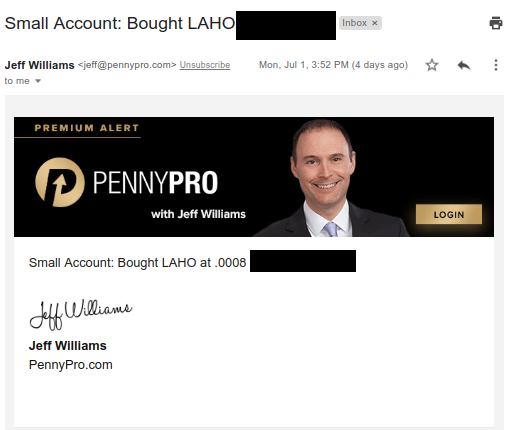 Well, the very next day, I took profits and locked in a 25% winner. 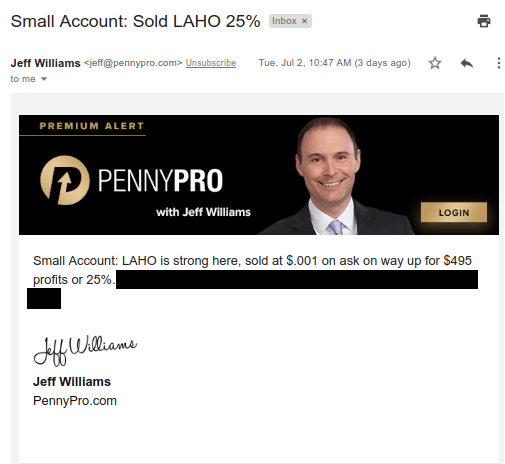 (Think trading penny stocks can benefit your trading account? Click here to get these alerts in real-time… and so much more.)

Now, some traders actually fall in love with these stocks… but that’s a no-no typically with sub-penny stocks.

Sub-penny stocks are usually bad long-term investments because they don’t have steady revenue or earnings streams like your traditional large cap stocks. However, that doesn’t mean you can’t make money trading penny stocks under a cent.

These stocks are meant to be traded… not bought and held. You see, with the trade in LAHO… I wasn’t buying it and thinking it’d be the best investment ever. I bought it because I spotted a bullish pattern, and figured it could run higher in a matter of days, then I could take profits.

When you’re trading sub-penny stocks, you don’t focus on the home run… thinking you’ll hit it big on just one stock. Instead, focusing on just getting base hits and winners was what helped me grow by small account by more than 70% recently.

Now, if you want to learn more about trading sub-penny stocks (or penny stocks in general), and how you can grow your small account… then you’ll want to check out my latest lesson in which I go over my 5-step plan for building small accounts. 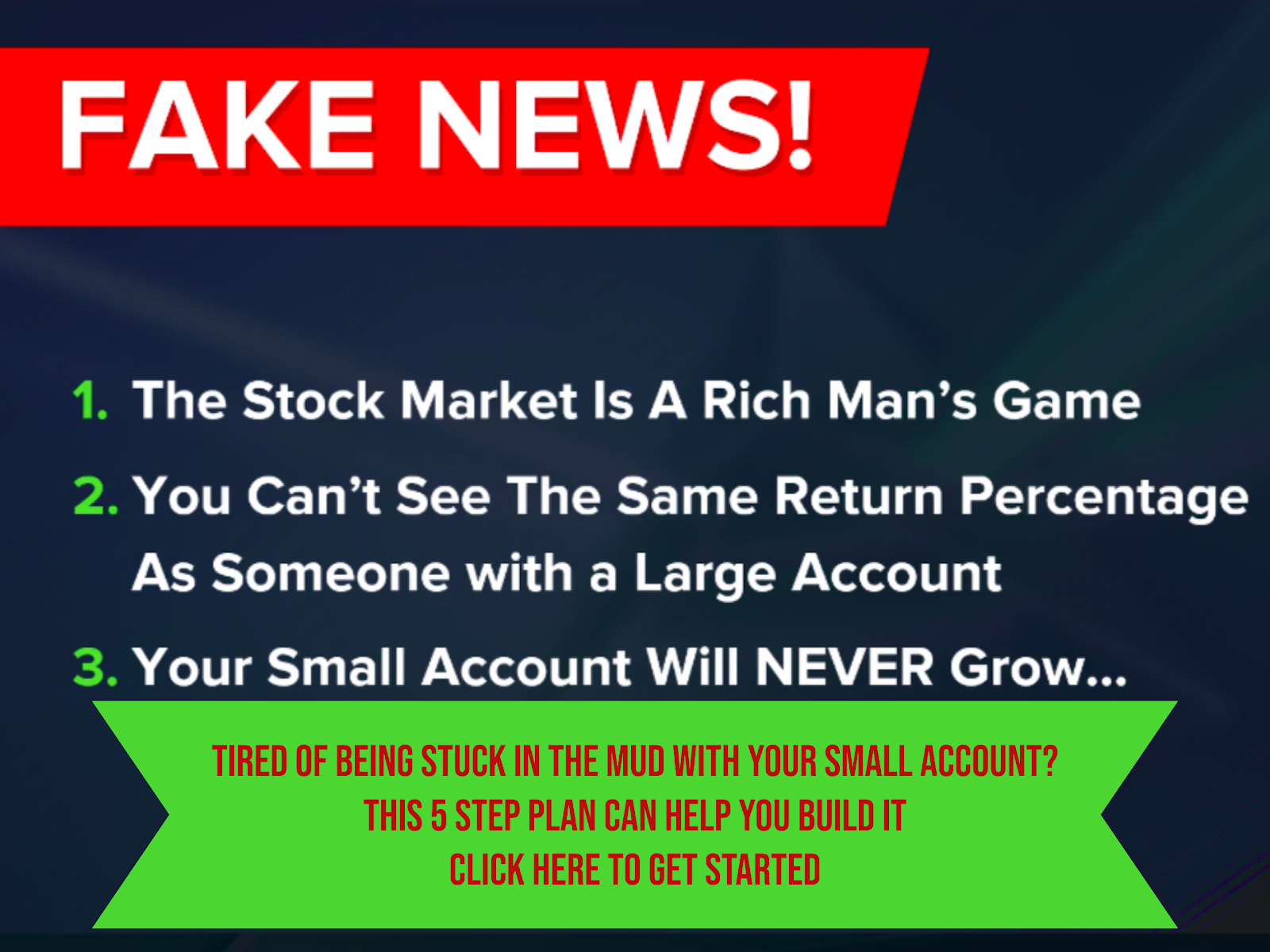 I just wanted to say thank you,I am up $14,200 this last week trading EURI, KBIO and MCUR