We’ve all heard it, the trend is your friend.

But what happens when the trend doesn’t appear…

And the overall market is choppy…

Believe it or not…

There are strategies for sideways markets too…

But instead of me just telling you about it…

I want to give you a real trade example…

Alright so there is no trend, now what?

If a stock is trading sideways, it still won’t move in a straight line.

It will move up and down just like during a trend. But instead of slanting in one direction, it stays in a sideways range.

In fact, it may look like a total mess on the chart.

Just look at the one below. You want to trade that? Probably not.

Without a trend, would you be bullish or bearish? 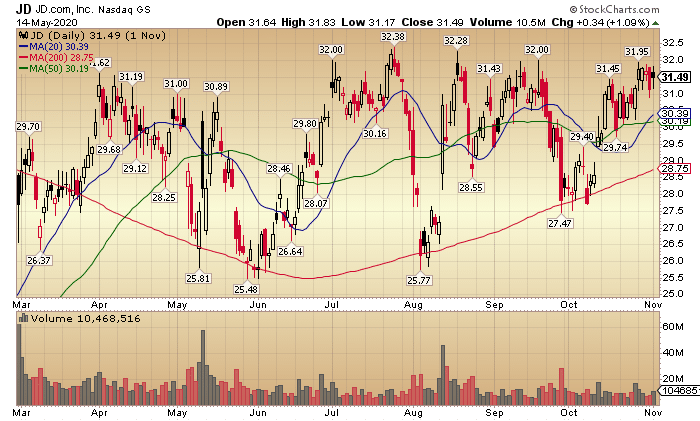 Here’s the thing… Just because a stock is directionless, doesn’t mean there isn’t a tradeable pattern.

And this brings us to the Horizontal Channel Pattern.

A channel occurs when the stock is moving between two parallel trendlines.

Now the channel can slant upward, downward, or sideways on the chart… but for the purpose of trading without a trend, we will be looking at the sideways channel (horizontal channel).

Trading a Horizontal Channel can be quite lucrative in a sideways market.

And technically the market doesn’t even have to be sideways. Sometimes you will find a stock that just happens to trade in a channel at some point in time regardless of the overall market.

Here it is in practice:

Remember the messy chart from above?

Well that is actually a great horizontal channel pattern in JD.com.

By connecting the swing highs around 32 and the swing lows just under 26, you can draw the channel on the chart to see it better.

Now can you see the potential?

You could have been buying around 26 with a stop below 25 and taking profit at 31.

Let’s say you took that trade 3 times before stopping out on the 4th. With risk of $1 for $5 profit, you would be up 15 points on the wins and minus 1 point on the 4th trade.

Basically pulling in a 50% gain. Not bad for a sideways mess of a chart. 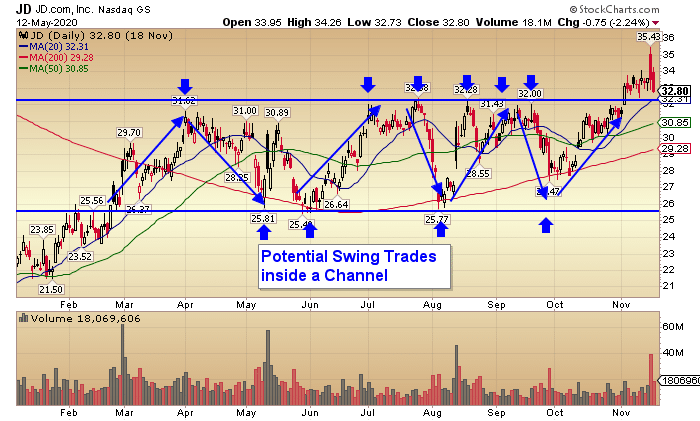 It won’t last forever so use stops and targets because at some point the stock will fail or break into a new pattern.

Now let’s throw another little tweak out there.

Going back to trends… what if you didn’t take the trades on both sides of a channel, but wanted to play only one side because you think the stock is strong or vice versa?

Zoom out on JD and here’s what the chart looks like. 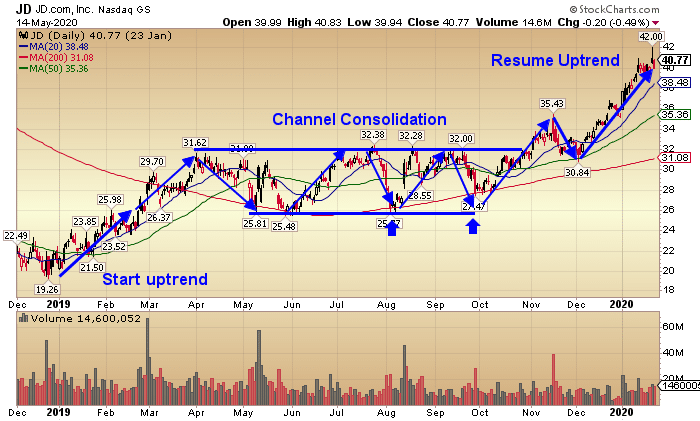 Notice how JD was in an uptrend before forming the horizontal channel.

In this case, I am looking at the channel as a consolidation pattern letting the stock take a breather before potentially resuming its trend.

I could conceivably just take the trade long trades in anticipation that one of them will lead into a breakout resuming the trend.

In this case, I am staying with my long theory on the stock.

Once JD does break out, I would have taken my profit off already because it was at the top of the range and that’s the target for the trade.

Plan your trade, and trade your plan.

But it’s okay… the breakout is just the beginning. A stock won’t usually breakout and just go without any type of pullback.

You see the pullback provides a very valuable service… it shakes out the weak hands.

If you look at the chart, you can see the pullback came slightly back into the channel.

A lot of the weaker hands will get nervous that it was a false breakout and think it’s about to head back to the bottom of the channel and get out.

This lets the real money add to their position one last time and makes for a smooth ride up from there.

And this allows you and I to take a safer trend trade by buying the stair step up after the pullback.

No matter which way you decide to trade the horizontal channel (trade both ways back and forth, or just play one side looking for a breakout on the other), learning a little more about technical analysis can go a long way to improving your odds.

Check out my Free Starter Pack to get you off on the right foot… grab it here. 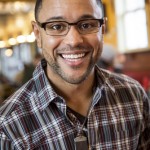 Nice alert and nice trade for you and I hope for others.  I just Made $1,650 profit on that trade!  Thanks and keep up the good work.