Lessons From A Penny Pro
by Jeff WilliamsWednesday, May 13, 2020

You get excited to see green on your screen…

So you decide to take it off for a small profit…

Trust me, I’ve been there more times than I’d like to admit.

But instead of torturing yourself—take the steps to figure things out.

You see, you can’t turn a day trade into a swing trade (or vice versa).

So if your goal is to get a bigger piece of the pie then you need to change some things.

For example, the time frames you use on charts, your position size, as well as, your profit target and stop loss.

How do you go about that?

Day trading, as the name suggests, consists of opening and closing trades on the same day.

Day traders are in and out of trades within hours, minutes, or even seconds and rarely hold a position overnight.

Swing traders on the other hand will be in trades for three to fives days and sometimes up to a week or two.

Their goal is to capture bigger moves than otherwise possible in day trading.

We all know the trend is your friend, and swing traders use this to their advantage.

Stocks rarely move in a straight line. Even in a strong trend they move in waves or a stair step pattern.

For example, a stock might go up for several days, followed by a pullback during the next few days, before heading back up again to continue higher overall.

These smaller “swings” up and down are a part of the overall trend.

Look at the chart below and you will see what I’m talking about.

While the stock is trending up, there are numerous swings up and down along the way.

A swing trader will try to profit from these moves by holding the stock over the course of days and weeks to grab as much of the move as possible. 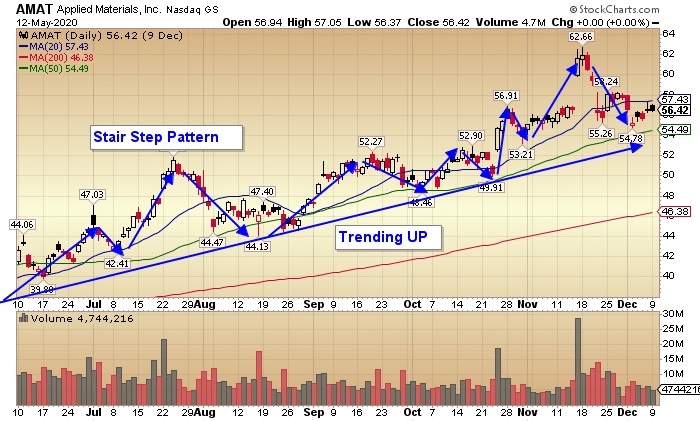 Besides the basic trendline and stair step pattern on the chart above, another great technical analysis tool for swing traders is the moving average.

Moving averages can provide support and resistance levels, as well as bullish and bearish crossover patterns.

But besides looking at support and resistance around these major averages… you can also use what’s called a moving average crossover.

Now for an example, look at the AMAT chart below showing a cross of the 8 and 20 SMAs.

The blue ovals show each time the 8 SMA crosses above the 20 SMA (red line crossing above blue line).

Notice how the upward trend continues each time the cross up occurs. 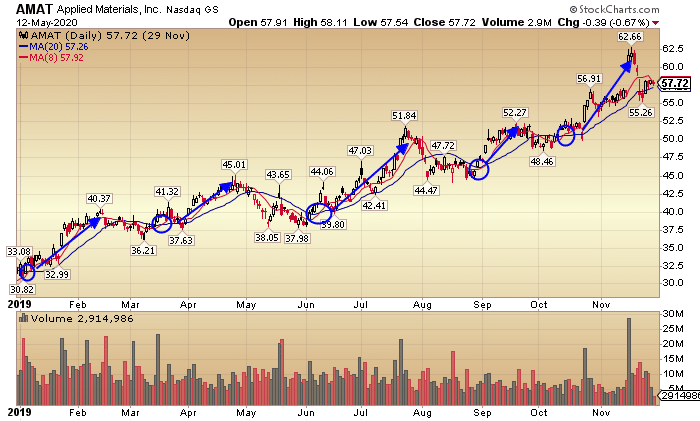 The cross up happens after a pullback and is acting as a signal… alerting us that the stock is potentially resuming the trend.

While you can use any number of moving average crosses, some work better than others… so pay attention to what you are trading and what works for that stock.

And of course they are best used in conjunction with other tools.

I use a specific set of moving averages that I use with my chart patterns and volume analysis to up my odds of making profitable trades… learn it all right here.

Since it is unknown how many days or weeks a pullback or counter trend may last, you want to enter a swing trade when the stock has resumed the original trend.

We aren’t picking a bottom, we are trading with the trend.

So until it resumes, there is no trade.

In the chart below, you can see one way in which a swing trade entry (blue line), stop (red line), and target (green box) can be determined to grab the continuation swings of the uptrend.

In this strategy, the entry (blue line) needs two things…  the 8 SMA news to cross above the 20 SMA, and then enter as price begins to swing back up after the pullback.

Finding a stop (red line) is as easy as looking at the previous low going into the buy entry.

Whereas a profit target (green box) on this type of swing trade could be calculated as a percentage above the previous high.

You can base this on the size of the moves from previous swings.

Or the way I did it in the chart below… where I used the difference from the previous swing high to the low of the pullback to determine how far to let it run from the next entry point.

My next entry based on my MA cross and trend resumption was at about $41, so my target range on the trade was $4 above, putting it at about $45.

This isn’t an exact science of course, which is why I draw a box for my profit target.

I’m using it as a profit target range. Once in the range I can scale out, watch how it trades on the intraday charts, phone a friend… or any other number of options to decide when to pull the plug.

The point is I won’t be the guy missing a profit by one cent because I had too rigid of a profit target when the stock didn’t quite make it there. 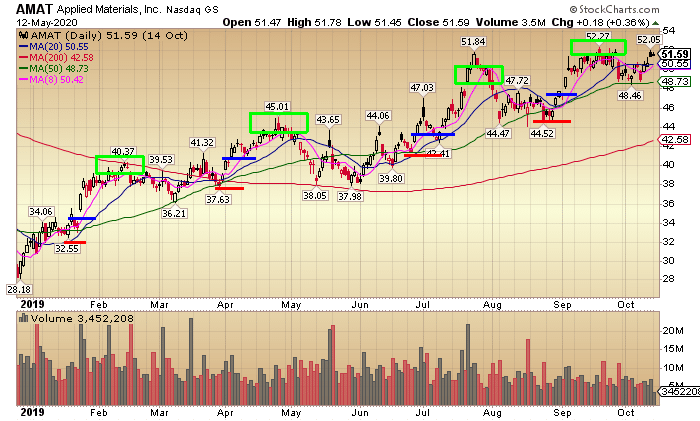 While a day trader may be in and out of this same stock on an intraday volume spike for a nice profit, the swing trader may have entered for another reason that same day.

The difference is the day trader is out with his small profit and the swing trader is just getting started trying to grab a bigger piece of the move… without the stress of constant in and out.

And I’m not saying a day trader can’t make the same money on this stock.

By the time the trade hits a swing trader’s profit target, the day trader may have been in and out of the stock numerous times and made the same or more.

It’s more about what strategy works for you. What fits your personality and risk tolerance etc.

There are many ways to make money trading, the key is finding what works for you.

And swing trading offers a great alternative to the hyperactive day trading.

Another great thing with swing trading, is that it works great with large cap stocks.

They have a tendency to trade within well defined highs and lows. And to top it off, they provide a lot of liquidity making it easier to get in and out.

So you can trade the companies you know and aren’t limited in your selection of symbols.

Heck, you aren’t even limited in your selection of markets as swing trading works in futures, commodities, FX, pennies, crypto, you name it.

Learning the basics of technical analysis and swing trading will help you no matter what type of strategy you end up using.

To see how I use my these tools in my trading, Click Right Here