Lessons From A Penny Pro
by Jeff WilliamsWednesday, September 16, 2020

Who needs to worry about the Fed when you have stocks like FPVD… moving on their own accord.

Never heard of it?

This has become a hot topic lately and it’s a trend that should be big as law enforcement all over the country works to meet public expectations.

Now I’m not saying look at this company for a long term investment.. I’m not qualified to do that… (and if you look at their balance sheet, well there’s not much there).

What I CAN show you however, is how I take advantage of trading opportunities.

When companies have specific catalysts pushing their stocks to new heights…

That’s where you’ll find me, looking to take advantage.

So what was so intriguing about FPVD?

Like I said it’s a little stock in a hot topic industry.

But just as importantly…

After a move up, the stock formed a continuation pattern.

You know I’m all about the technicals… but a lot of people miss this one little detail that’s a big part of a lot of my trades… A Catalyst!

When you can put a catalyst, such as a hot industry or earnings release, together with the right technicals… the odds of winning are that much higher.

Not to mention the moves are that much bigger.

And given recent current events between law enforcement agencies and the public… the company has a little bit of a spotlight/ catalyst to move the stock.

That means nothing to me in terms of whether they are a viable going concern. I don’t really care. I’m just here to make quick profits trading the specific catalyst and chart setups.

Being in a hot topic industry, traders took notice at the lower loss from the previous year…

That was enough to set the stock off.

Often a bullish chart pattern, the ascending triangle pattern is generally considered to be a continuation pattern, meaning that the pattern often forms before a continued move in the direction of the previous trend.

Being a type of consolidation pattern, volume tends to contract during an ascending triangle as the stock is building pressure for its next move.

With the triangle formation, I’m looking for a break above but there’s one key element on the break that’s extremely important to consider… Volume!

Be careful on low volume breakouts.

If the price breaks out on low volume, there may not be enough strength/ demand to push it higher causing it to fall right back into the triangle… this is called a false breakout.

What I want to see is for the price to break out on a big surge in volume.

This lets me know there’s real demand backing the move.

Take a look at the FPVD setup.

Below you will see the ascending triangle pattern formation going into the earnings release.

Notice how it formed after a big move up… so I’m looking at a previous uptrend, meaning this triangle will work as a potential continuation pattern to the upside.

And notice the level of volume during the triangle formation.

It falls off dramatically from the earlier move up… that’s because the stock is consolidating.

And the fact that the lower trendline of the triangle is pointed up while the volume is decreasing tells me there’s accumulation going on… potentially getting the stock ready for a breakout. 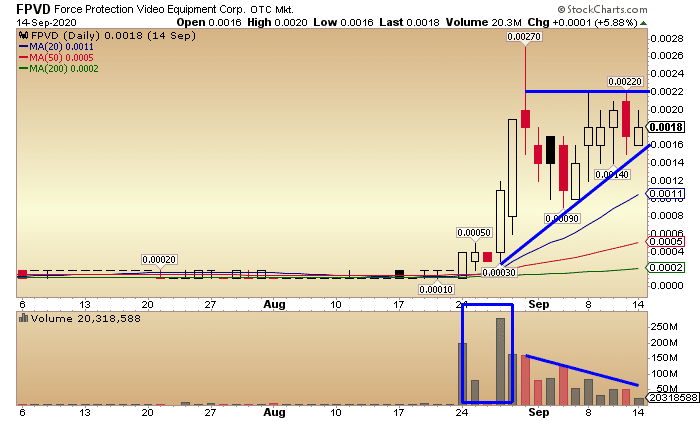 Wait for the breakout of course… And don’t forget how important volume is here.

Looking at FPVD, volume went from around 20M to nearly 600M on the breakout.

That’s huge… and it’s all I needed to jump in. 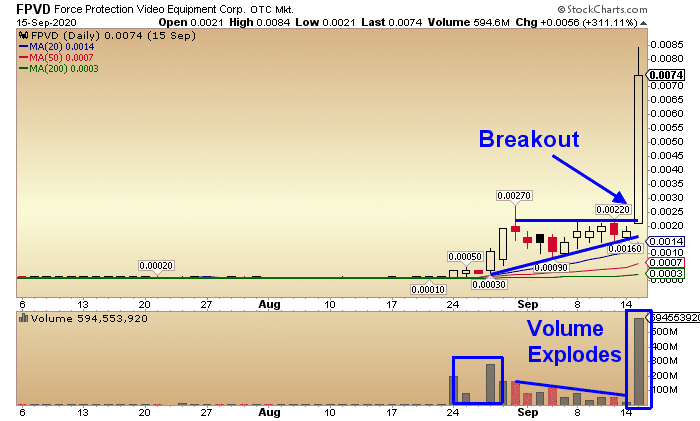 If you look at the chart.. There’s one swing high further back at .0027 that I didn’t draw into the triangle.

I took note of it as there could be some resistance there. Basically I wanted to see the price clear this level to knock out any overhead supply.

And with that level of volume, FPVD was off to the races. 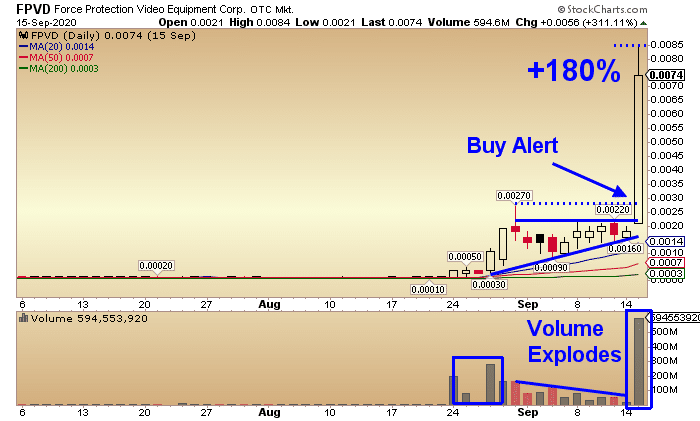 When you look back at the chart above…  it’s not that hard to see the trade.

But it takes a little more experience to see it in real time… not to mention to find it as it happens.

For that, I utilize a number of tools to keep these types of moves in front me each day.

None of it is super complicated though. All it takes is a basic screener with a few criteria to narrow in on the stocks most likely to make quick moves.

And once they are in front of me… I use a few simple patterns, like the triangle above… add in the importance of something as simple as volume…  and I’m finding great trades.

To learn more about my personal trading strategy, screeners, and setups…