Editorial
by Jeff WilliamsThursday, May 7, 2020

Yesterday I showed you how I use support and resistance lines to improve my entries and exits on my trades.

Continuing on that lesson, I now want to talk to you about moving averages.

Now, normally you may think of moving averages as a tool for identifying the trend of a stock.

But savvy traders also use them for support and resistance levels…

That’s because it is common to see the price of a stock bouncing off a moving average as it trends… thus the moving average is acting as support or resistance.

Believe it or not it’s a simple concept.

And it can improve your trading performance.

Now it’s time to learn how it works.

That’s why I’ve created a step-by-step analysis on how I used moving averages in a recent trade I had in TBLT.

It’s a perfect example of using moving averages as support and resistance levels.

Moving Averages as Support and Resistance

One of the many ways I use moving averages (MA) in my trading is by looking for support and resistance levels.

Some of the most significant MAs for the long term trend of a stock are the 200 day and 50 day simple moving averages (SMA)s…. These are widely used throughout the trading community…

The 20 SMA is also great for the shorter-term movements…

There is no sure thing in trading… 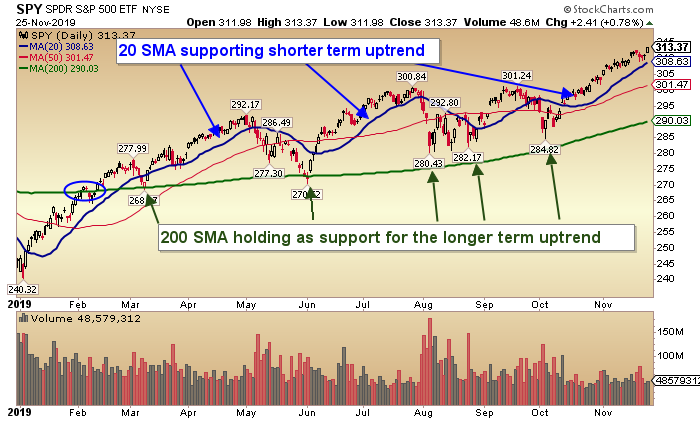 By looking at the chart, you can see the significance or lack thereof for each…

The 200 SMA (green) holds the uptrend support over the longer term… when the price moves down, it bounces off the 200 day to eventually resume the uptrend…

The 20 SMA (blue) is also being used for support in this chart… but on the shorter-term trend.

After price holds support at the 200 SMA, it bounces back and on resuming the trend, price hugs the 20 SMA for a nice move up each time before repeating the process.

But the 50 SMA (red) in this case is less significant as there doesn’t appear to be any clear support or resistance at the 50 day… more so it acts an area of congestion with the stock caught in between running on the 20 or pullback to the 200.

In NXPI however… It’s the 200 SMA and the 50 SMA that hold as support to the uptrend with the 20 SMA getting sliced up by the stock moves, adding relatively no value…

So in contrast to the SPY chart, for NXPI you would want to focus trade setups on the 50 and 200 SMA and not the 20… 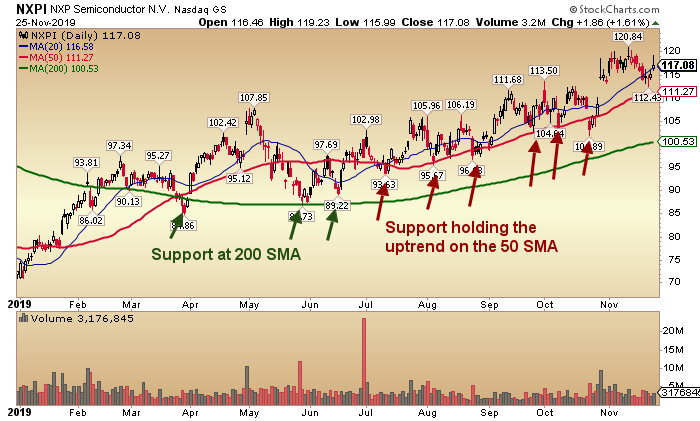 This just shows the importance of analyzing the chart and finding the levels and indicators that are significant to that specific stock before trading it.

There is no “one size fits all” here… so when I trade using moving averages to find support for entering trades and resistance when exiting, I am always aware of which ones are important to my trade.

Take a look at this real money trade to see this in action.

Get ready for a chart heavy step by step…

Below you can see how the stock for ToughBuilt Industries (TBLT) trades around the 20 day SMA (blue line).

As you will notice the 20 day is acting as resistance to the stock price… every time the price goes up, it stalls at the blue line and heads back down.

This tells me one simple thing… I’m not buying TBLT while it’s below the 20 day SMA.

The odds are not in my favor buying below resistance levels in a downtrend, so I don’t. 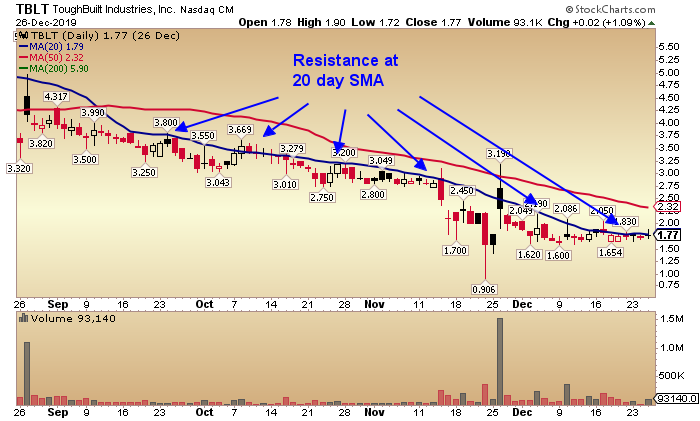 Now look at the next chart.

And volume picked up on that move as well, alerting me to a potential change of the momentum here.

I’m not buying yet though. The 50 day SMA (red line) is right above us. This could provide the next resistance level, so I need to see how the stock trades here. 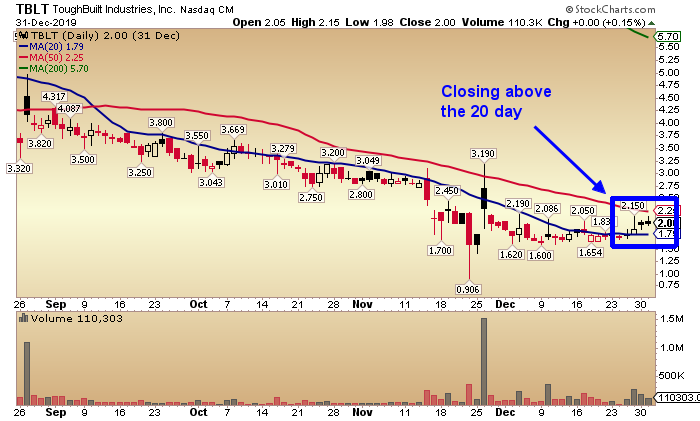 And here we go… BAM!

The price gaps above the 50 day on a nice spike in volume. Now I’m perking up. The volume is telling me this is significant.

The next day it tests the 50 day and bounces up, closing above it again.

Now with the 50 day acting as support, I just need a trade setup that puts the odds in my favor. 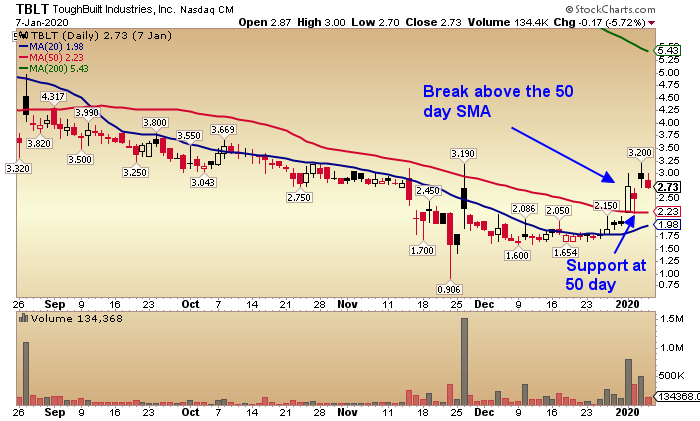 And rolling right along, we get a spike above the swing high after establishing support at the 50day… again on high volume.

This is my cue to jump in the trade.

And of particular note on this chart is the 200 day SMA peaking out there at the top of the screen.

You see, the 200 day SMA is a major psychological level for traders. It acts as resistance when it’s above the stock price and support when below it.

Knowing this lets me set realistic profit targets, getting out while the momentum is still in my favor. 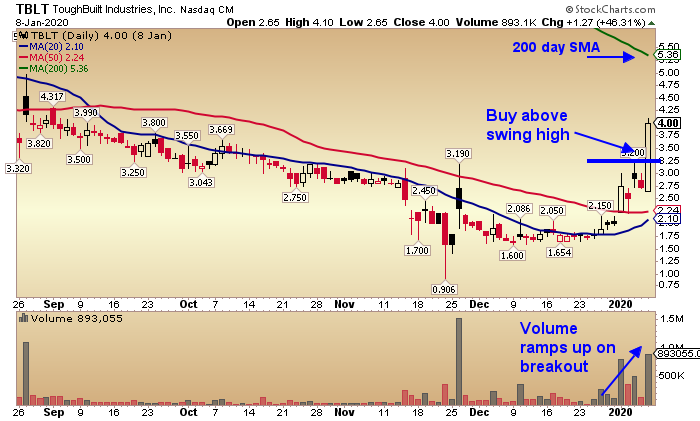 Knowing the 200 day will most likely provide resistance, I set my profit targets… not at the 200 day, but under it.

Enough so that I am getting out as others are still pushing it up and waiting for the last pennies of profits. 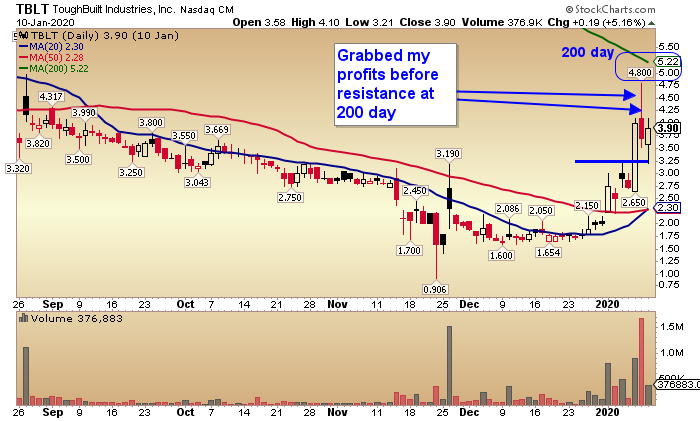 We’ve all heard it… Don’t trip over dollars to pick up pennies.

I’m grabbing a double digit gain overnight on this trade… what more could I ask for?!

And let me tell you, quick double digit returns add up fast.

In fact, I just turned my $500 account into over $10,700k in just 3 months during all this pandemic volatility…

And that’s not a surprise to me because I’ve been doing this over and over in my small account challenges… (my newest challenge is coming in the next couple weeks too).

I am teaching my members every little part of this strategy and how to use moving averages as well as volume, support and resistance, and chart patterns to make quick profits.

And as a former teacher, I have a knack for breaking down complicated matters and delivering them in a way that anybody can understand… and I love doing it…

Don’t hesitate to get started… I am making it a no brainer with my Stock Trading Starter Pack.