Lessons From A Penny Pro
by Jeff WilliamsThursday, August 1, 2019

Stocks were shaken up yesterday after the Fed announced its first interest rate cut in over ten years.

To make matters worse, the Fed left it unclear on what its plans are for the future– are more rate cuts expected later this year or was this a one-off rate cut?

Whenever there is a market-moving catalyst, like an interest rate announcement, you can expect most stocks to correlate and move in the same direction…

However, some small-cap penny stocks will move opposite of the market, even when there is a big macro-catalyst event.

But that’s just one of the reasons why I prefer trading small-cap penny stocks over large-caps.

Why I Don’t Trade Large-Cap Stocks

If you haven’t heard by now… I’ve been taking on a new Small Account Challenge… and I’m looking to turn $3K into $100K fast while taking on very little risk.

So far… going into week 7 of this challenge, I realized over $10K in real-money profits… all with a small account. 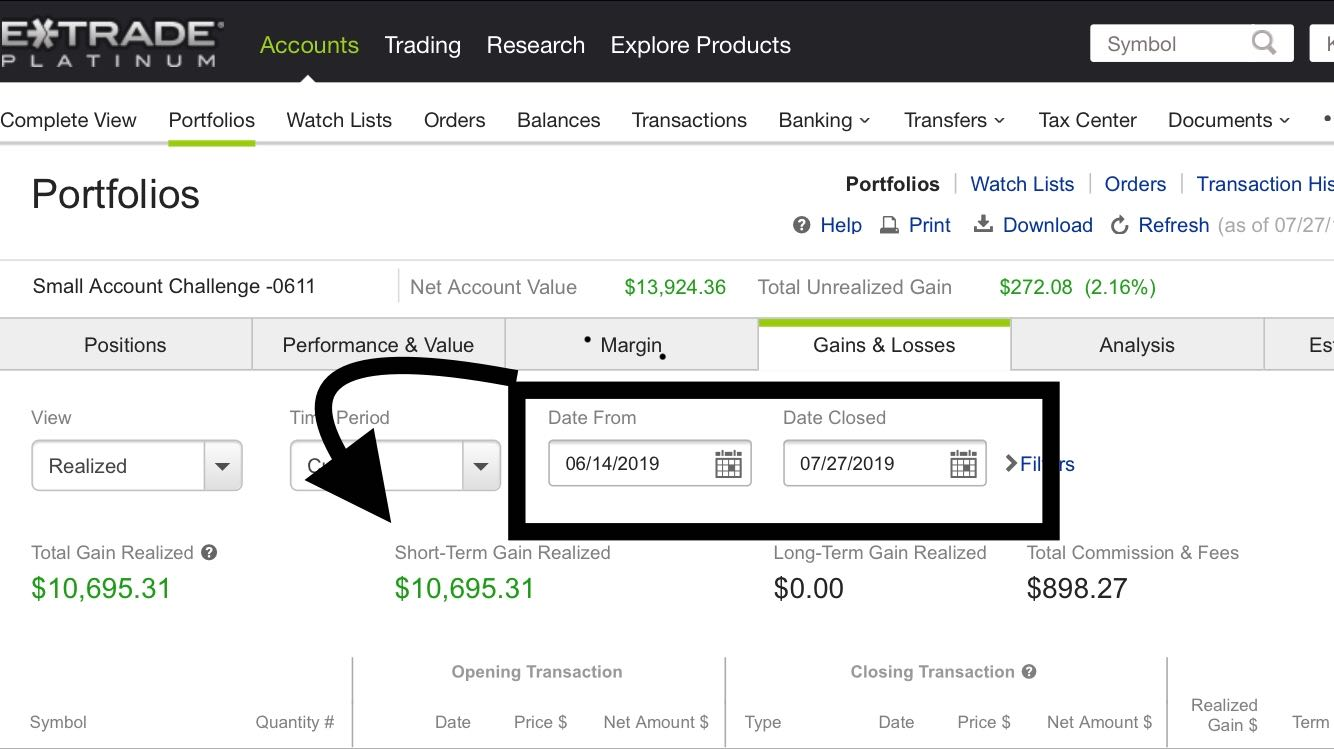 You see, I actually don’t trade large caps at all… I actually trade penny stocks

Well, there are a number of reasons why large caps are “inferior” to penny stocks when you have a small account.

1. Large Caps Stocks Are Not As Volatile As Small-Caps

How many times have you seen a large-cap stock (a stock with over $10B in market cap) up over 50% in a day?

Very few… and if it did move that much, it was probably on some buyout news… or a very bullish catalyst.

For example, Apple Inc. (AAPL) reported earnings the other day… and the following day it was trading higher by 4%… talk about a snoozefest.

The reason why large-caps don’t move a lot is because they’re already well-established companies that aren’t focused on growing as much as penny stocks.

Also, think about it like this… Apple has a market cap of $1T… for it to move higher by 20% is just very unlikely… and it would probably take a while for it to get to those levels.

On the other hand, penny stocks are companies with small market capitalizations that are focused on expanding… and it’s more likely for a stock with a market cap of say $200M to announce positive news and move 50% (that’s only a gain of $100M in market cap, which is a drop in the bucket when you compare it to large caps).

For example, check out this headline in Northern Dynasty (NAK)… 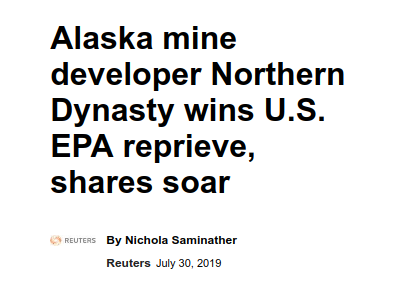 Well, that positive news sent the stock and it was up over 60% (in just one day) at one point. 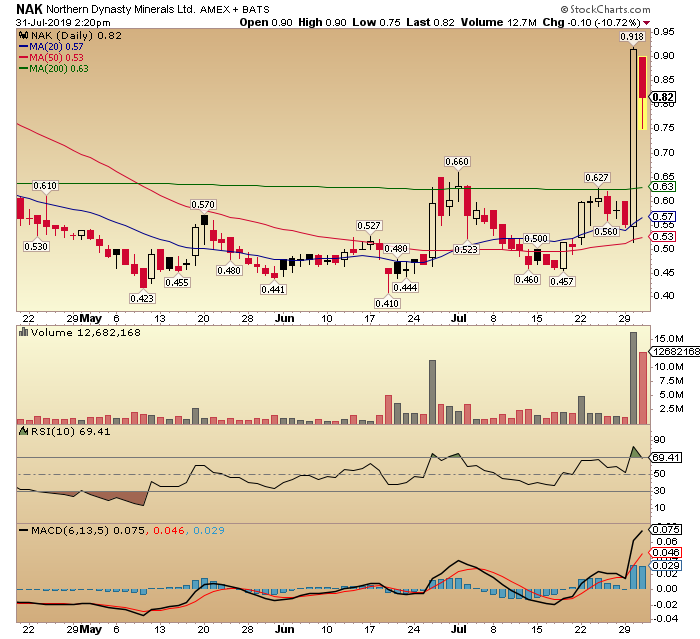 That’s not the only reason why I think penny and small-cap stocks are better than large-cap stocks.

2)  Large-Caps Have A Lot of Eyes on Them

Large caps are typically covered by banks and major news outlets. In other words, there are a lot of eyes on these stocks… and you’re competing against money managers who have better research tools than us… and that means we don’t have an edge in the space.

For example, if you just look up Apple on Yahoo Finance and look at the news… there’s a ton of coverage. 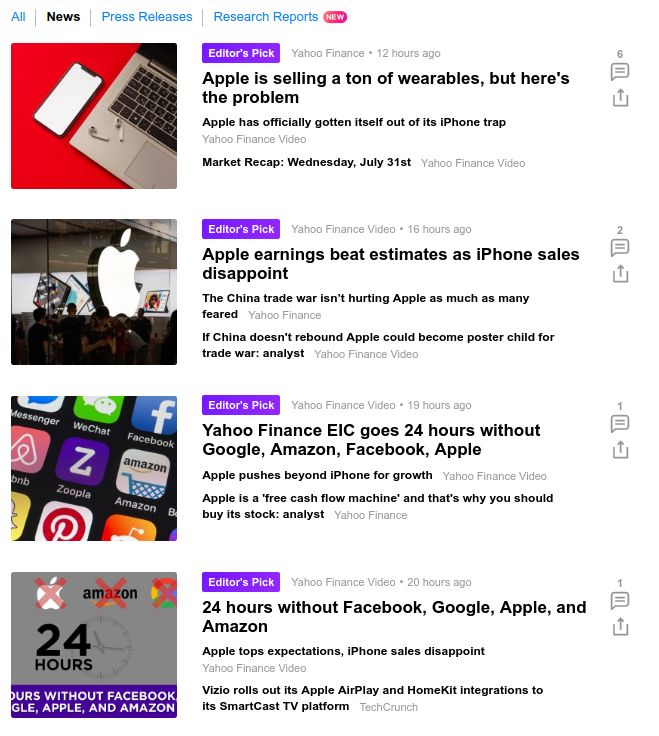 On the other hand, major financial institutions don’t really provide research on penny stocks and some small caps.

Well, simply because they won’t provide as much revenues to them as large caps would.

However, that’s actually a good thing for penny stock traders.

You see, that means there are less eyes on these stocks… allowing us to have an edge…

For example, you can read more about one of my strategies that have an edge in penny stocks here.

3) Large Caps Are Poor Use of Capital For Small Accounts

Let’s face it… large caps are expensive… and if you have a small account… you don’t have any leverage at all. In other words, you probably won’t be able to buy enough shares for it to make sense.

For example, let’s say you’re trading with a $10K account.

You see, when you look for large-cap stocks to trade… you’re only able to buy a small amount of shares.

Let’s say you wanted to trade Apple. Well, with a $10K account, you would only be able to buy around 45 shares (using Apple’s opening price of $216.42 yesterday)… and even if the stock goes up… your percentage return on your capital will be lackluster.

Additionally, if you buy large-cap stocks… it eats at your buying power, so if you see another good play…

… you’re either going to miss out on the opportunity… or sell your shares so that you can get into a new position. Basically, it’s really hard to make money from trading large caps with a small account.

On the other hand, with penny stocks… you’re able to use your capital more efficiently.

For example, you won’t need to use all of your capital to buy just one penny stock. In fact, you can allow just a percentage to a specific penny stock. Let’s continue with the $10K account example.

If you want to buy a penny stock trading at $0.75… you could buy 2,000 shares and only use 15% of your capital… compared to 45 shares of Apple which would use nearly all of your capital.

Now, if you’re able to grow your account… you can scale your trades… trade with larger size… and generate more profits.

With that being said, if you have a small account… penny stocks could help you achieve your goals faster than just trading large caps.

Not only that, but penny stocks allow you to leverage your capital a lot better and the potential rewards make more sense than using all your capital to buy a large-cap stock… just to return a few percentage points of your money.

Moreover, with penny stocks, you can actually find an edge and actually outperform the market. 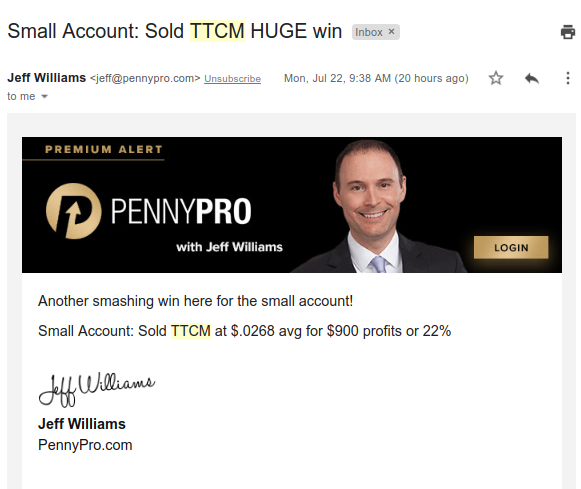 … with a high degree of consistency…

Then you’ll want to check out my latest breakthrough trading system – The Profit Prism – which has allowed me to generate over 300% in returns so far on my small account.

Just shy of 46% this morning!! got very lucky. homework time to avoid over trading…. SO close to being able to afford the new car I want!!! Of course my wife will have to “buy it” because she has an actual job, but I’m on a perfect track to make a nice down payment and steady payments!